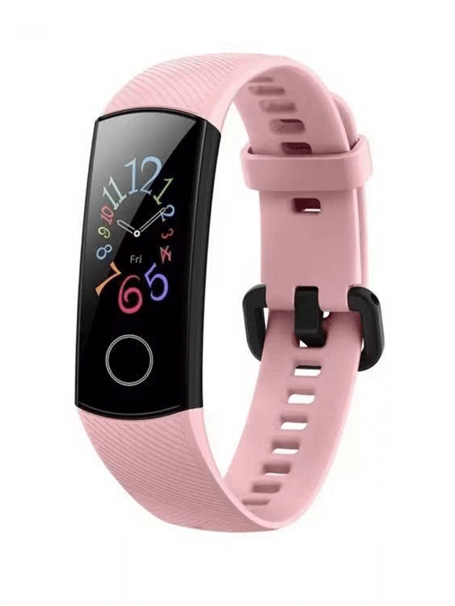 The economical smart watch market is competitive. HONOR, Xiaomi, Samsung and other companies have begun to compete for market share. The HONOR Band 5 pink is one of the latest products introduced to the market by HONOR.

There might be people who want to use smart bands to monitor their health and fitness quality. For them, it is quite attractive. Want other highlights like recording the number of steps and sleep time? Then it is more suitable for you. It is one of the most affordable smart bands on the market.

For Band 5, HONOR has introduced some more advanced functions, including an improved screen. At the same time, it solves some problems with HONOR Band 4. Users can buy HONOR Band 5 for 29.99 pounds. This is much cheaper than some other expensive products. This means that if someone is looking for a new smart watch, there is no reason not to consider HONOR Band 5.

The HONOR Band 5 consists of a compact body and a detachable watchband. The compact housing can accommodate the screen. The material of the watchband is comfortable. HONOR Band 5 is a slim smart band. It looks very similar to HONOR Band 4. However, users will get a more comfortable experience than Band 4. It is small, similar to Xiaomi Mi Band 4. The width is not large. The watch body is as wide as the watchband.

The watchband is made of silicone. This is quite standard material in smart watch watchbands. It is a long watchband with many ears. Users can easily wear it on their wrists.

The body of HONOR Band 5 is a little thicker than its width. So, it may protrude from the wrist. While it is not as obvious as other wearable devices. The watch has an electronic screen and a round button. The later one functions similar to the “Home Page” button. The HONOR Band 5 weighs only 22.7 g. Users can easily ignore its existence when wearing it.

In addition, it is a very simple device. It has no physical buttons or complex functions. Consumers who don’t want to spend too much money on smart watches will not expect a complicated design.

Are you looking for a smart watch that can track and record basic health status and fitness statistics but don’t want to spend too much money? Then HONOR Band 5 pink might be the most suitable smart watch for you.